Charlotte’s Best Bike Short Cuts: Easier Ways to Get There From Here

There are lots of great, and not-so-great quotes about shortcuts. And most of them don’t give too much praise or promise to the idea that there’s any better way to get where you’re going other than the road long and laborious. Clearly, the authors of these quote have never needed to get anywhere by bike! 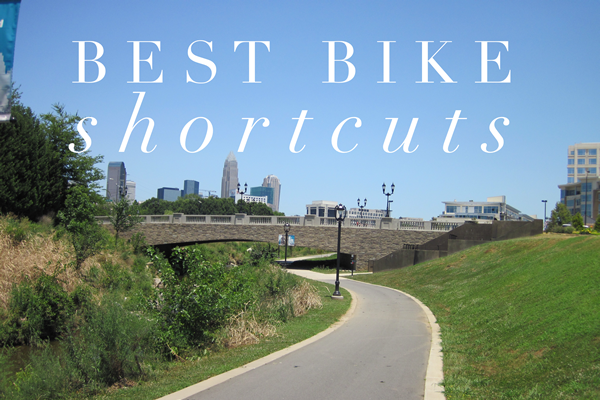 Well, there are lots of ways to get where you’re going that don’t involve taking the most heavily traveled roads. We can’t list them all, of course, but we asked friends who regularly commute for some of their best bets for safer, shorter cycling routes!

Sewickley Rd to Castlewood Rd to get between Scaleybark and the bike bridge on Belrose. Knocks a couple of blocks off a ride on Scaleybark.

Wesley heights greenway, all the way from Blue Blaze to BofA stadium.

Best bike shortcut from Plaza-Midwood to & from Dilworth is Caswell to Queens to Buchanan to Blythe to Garden Terrace, then up East Blvd.

Google Maps. Where you're at and where you want to go!

If I come in to uptown charlotte via the greenway, i hop off the GW at Elizabeth. I turn right onto N Long Street to cut through the parking lot and get onto McDowell (just helps avoid some traffic and those scary tracks on Elizabeth) Depending on rush hour traffic, I may take the sidewalk or street to 8th street, turn left then get on the rail trail and take that back down to my parking garage on 5th street. It's not a direct route, but it keeps me away from the crazy rush hour drivers.

Google maps’ street and satellite view to find little connectors. If you use a dead end with a connector there will be little traffic. To go east, I've used Barcliff - it has 2 steps, Woodleaf goes through a park.

I like taking the light rail trail to uptown. Wide, no cars, goes almost directly to uptown with very little traffic and people on the trail are generally aware of cyclists. Many access points, but one could park at Tyvola, take Old Pineville north and eventually run into the trail around Scaleybark.

I've found that inside fairview, you can often find neighborhoods that parallel big roads. Foxcroft has some, sterling instead of Queens, ferncliff cuts from barclay downs to cotswold (careful crossing streets). Point is, in older neighborhoods, there's better connectivity on safer, less trafficked roads. Use a map, parallel the big roads and get where you want to go safely without much extra mileage.

Know the bus routes. There are times when it may be safer or faster to rack your bike on the bus or LYNX to get someplace. Also comes in handy if you have an accident and need to carry your bike home.