A city planning boardgame? Yes, and it's awesome.

If you've been to a meeting where government staff are seeking public input, it's likely gone something like this: watch a short presentation, walk around to different stations to view maps, and put some colored dots or sticky notes with your comments onto poster boards. It's a time-tested strategy that connects residents directly with the staff who build and implement plans.

But now Charlotte's Planning, Design & Development Department is taking engagement a step forward. At the June 24 City Council Transportation and Planning Committee meeting (view the full meeting notes here), planning staff shared an in-depth overview of a new board game that's designed to be played by residents to educate them about land use and solicit feedback on how Charlotte should grow.

Unlike a traditional board game, the goal isn't for one "winner" to emerge victorious. Instead, the goal is for the whole group of players to make the best use of space within Charlotte. 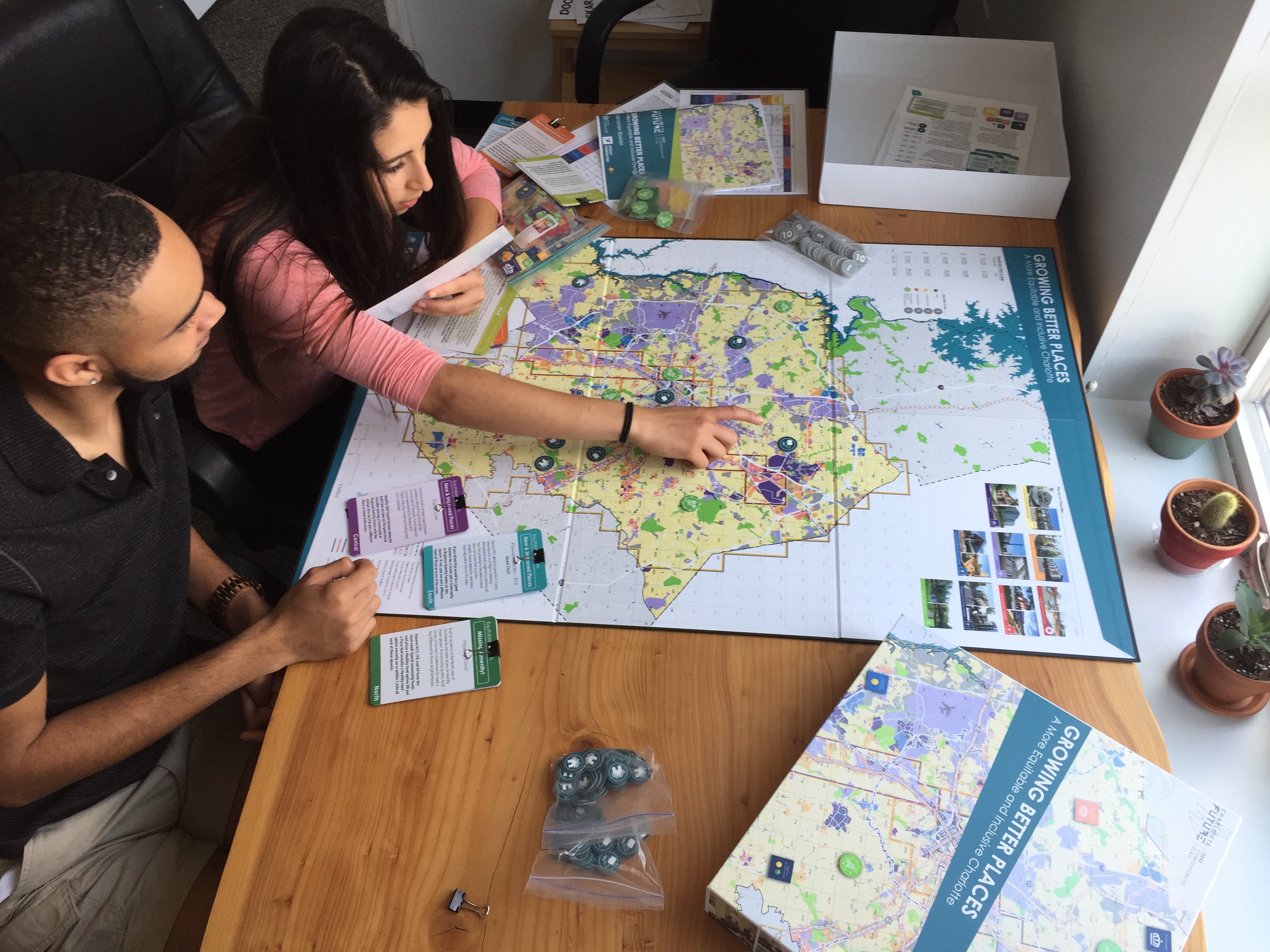 Our interns Jaire and Tamara enjoyed checking out the Growing Better Places board game!

We have several...let's say game geeks here on the Sustain Charlotte team who have rather high standards for board games. We're seriously impressed with the quality of the game's components, instructions, and usefulness as a public engagement platform! 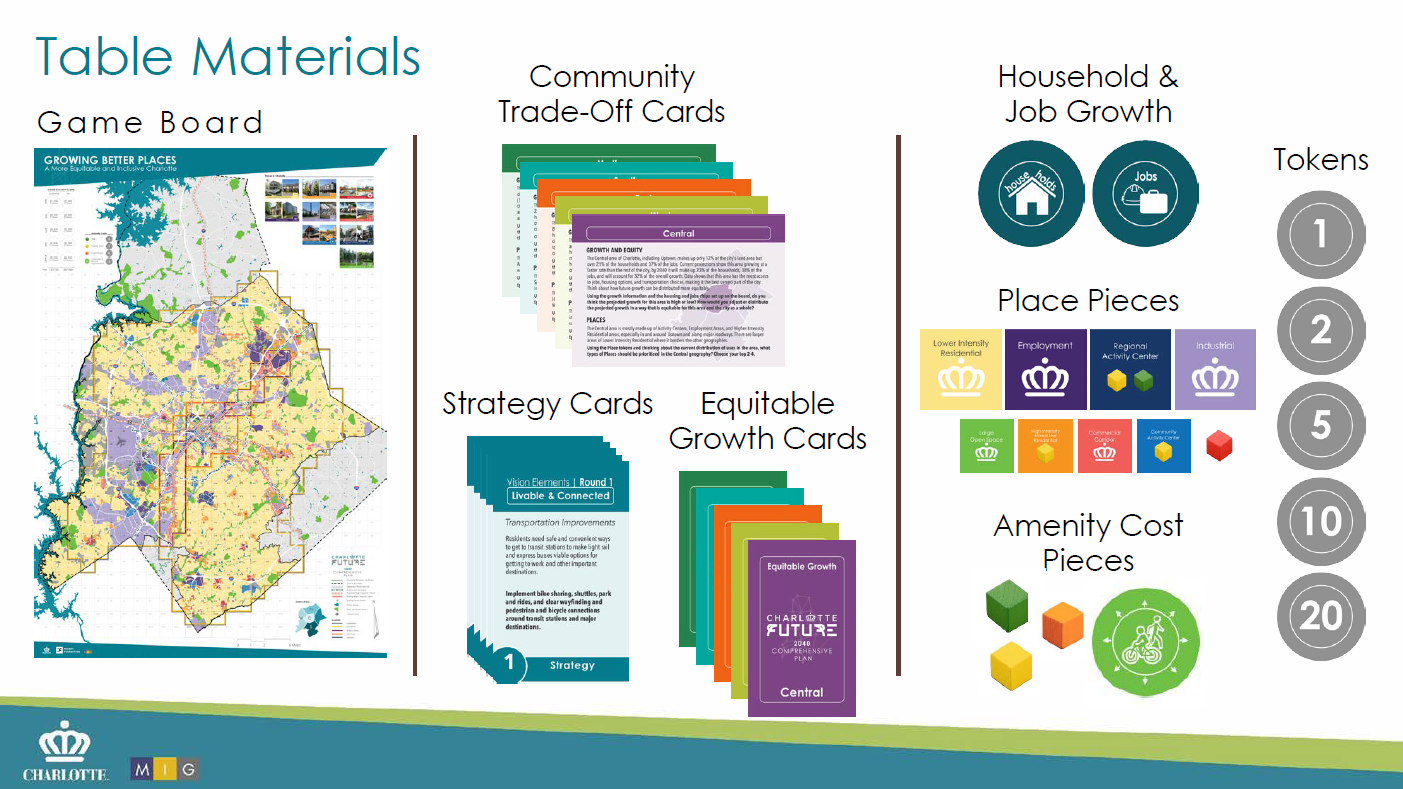 Don't you just want to get your hands on these beautiful game components right now?

The game is an important part of developing a Preferred Scenario for Future Growth on which to build the city's Charlotte Future 2040 Comprehensive Plan. Feedback from the board game input sessions will be gathered through a post-game survey, and by analyzing photos of the completed game boards (pretty cool, right?).

The next phase for the plan will be the development of policies and strategies, followed by City Council review and adoption. Learn more about the game and even play an online version here! Sustain Charlotte will partner with the City and POTIONS & PIXELS to bring you a game play event in late July, so stay tuned to our newsletter and social media for details.

The committee also heard an update on the TOD (Transit-Oriented Development) Alignment Rezoning initiative. This is a process we've followed closely and shared our insights on as we serve on the Unified Development Ordinance advisory committee.

Parcels of land along the Blue Line light rail corridor will be rezoned so that their future development (or redevelopment) aligns with adopted land use recommendations and policies. This is really important because many areas near light rail are rapidly developing and increasing in value. The process will help to ensure that growth near Charlotte's transit stations is sustainable, vibrant, and walkable.

Existing structures that don't conform to the new TOD zoning rules are "grandfathered". This means that although a new restaurant near a light rail station can't be built with a drive-through and a parking lot between the building and street, an already existing restaurant doesn't have to be changed. 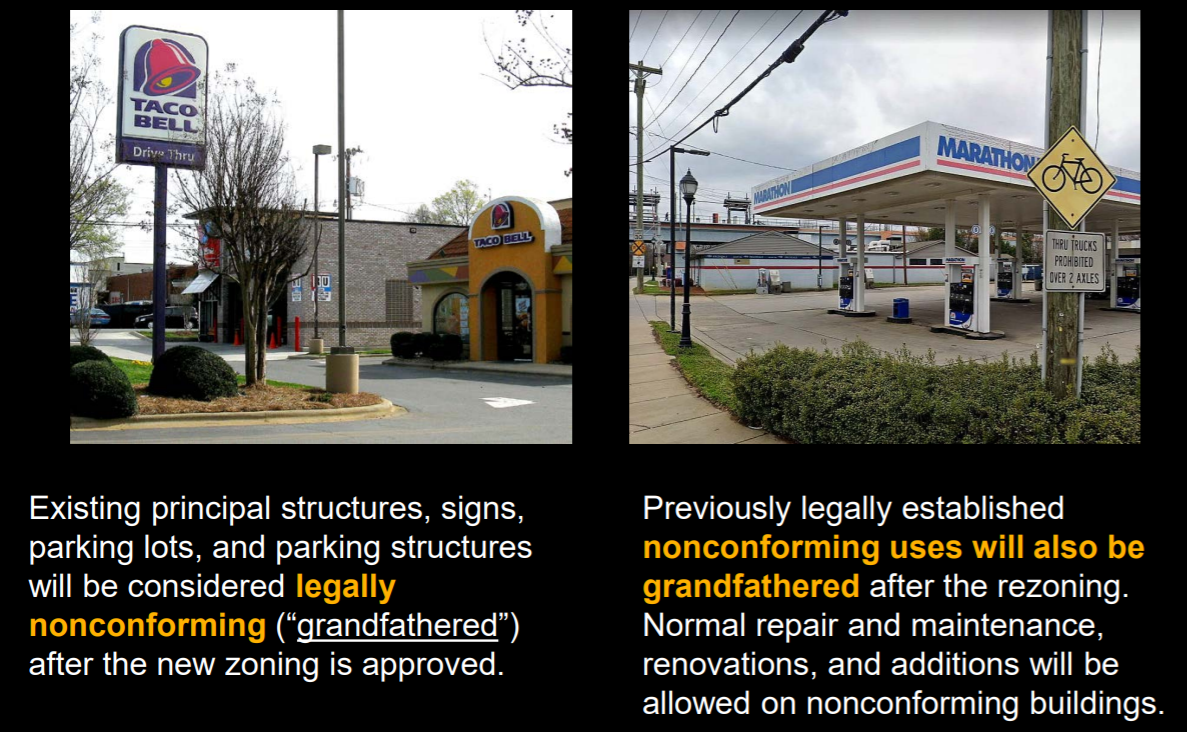 The rezonings will be applied for two levels of development density. The first category is "Moderate-Intensity Station Areas", which includes Sugar Creek and all stations to the north (except the final UNCC campus stop) as well as Scaleybark and all stations to the south. The second category is "High-Intensity Station Areas", which includes Parkwood to 36th St in the north, as well as Carson to New Bern in the south. The rezonings don't apply within the I-77/277 loop, or parcels with Uptown Mixed-Use District zoning, or parcels with Conditional or Optional Urban Zoning Districts.

Want to learn more? There will be a public drop-in open house on July 18 at Pritchard Memorial Baptist Church. Check out the website for details about this process.

The committee heard an update on a proposed text amendment to the Tree Ordinance for Urban Zones. The purpose of the amendment is to provide flexibility for more urban sites to be developed or redeveloped, allow better integration of trees into urban zones, and test new concepts in advance of the Unified Development Ordinance (UDO).

This amendment would allow for more infill development -- that is, development within existing communities -- rather than sprawl because it would offer some flexibility for how tree requirements are achieved. For example, some small urban sites have not been developed because the existing tree ordinance would not allow for both a profitable building project and the required configuration of trees on the site.

Most importantly, the proposed amendment would result in no net loss of code required trees. That's a critical element if Charlotte is going to reverse its tree loss and make progress towards its goal of a 50% tree canopy by 2050.

The new amendment would only apply to the Urban Zones, as depicted in this map: 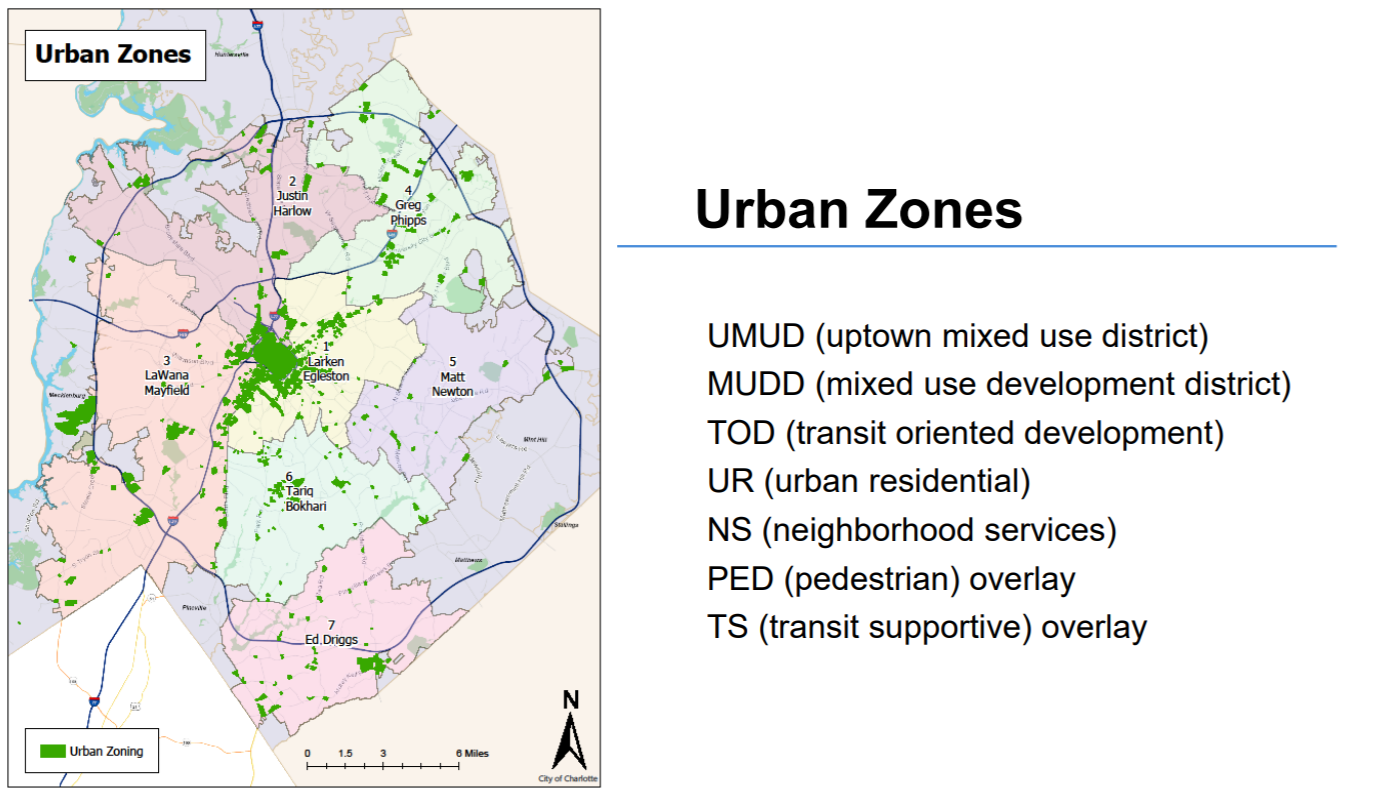 Sustain Charlotte and more than a dozen local organizations served on a stakeholder group that helped staff develop the proposed text amendment. There will be a City Council public hearing in September, followed by Council's decision in October.