Attending the Metropolitan Transit Committee (MTC) meeting is always interesting, and last Wednesday's meeting was full of timely updates. What important developments in the world of Charlotte-Mecklenburg transit should you know about?

We've got the scoop for you!

Your questions of CATS and its governing board will be answered.

Have you ever spoken at a public meeting and not heard any response afterward? That’s changing. Chair Susan Harden has asked the MTC or CATS staff to respond to each speaker at meetings and to follow up as needed. We love it!

CATS bus riders report high satisfaction. But what about people who aren’t riding?

In its most recent rider survey, CATS  scored very highly for rider satisfaction as measured by their net promoter score. Survey takers measured on-time service and bus cleanliness as most important to their experience. 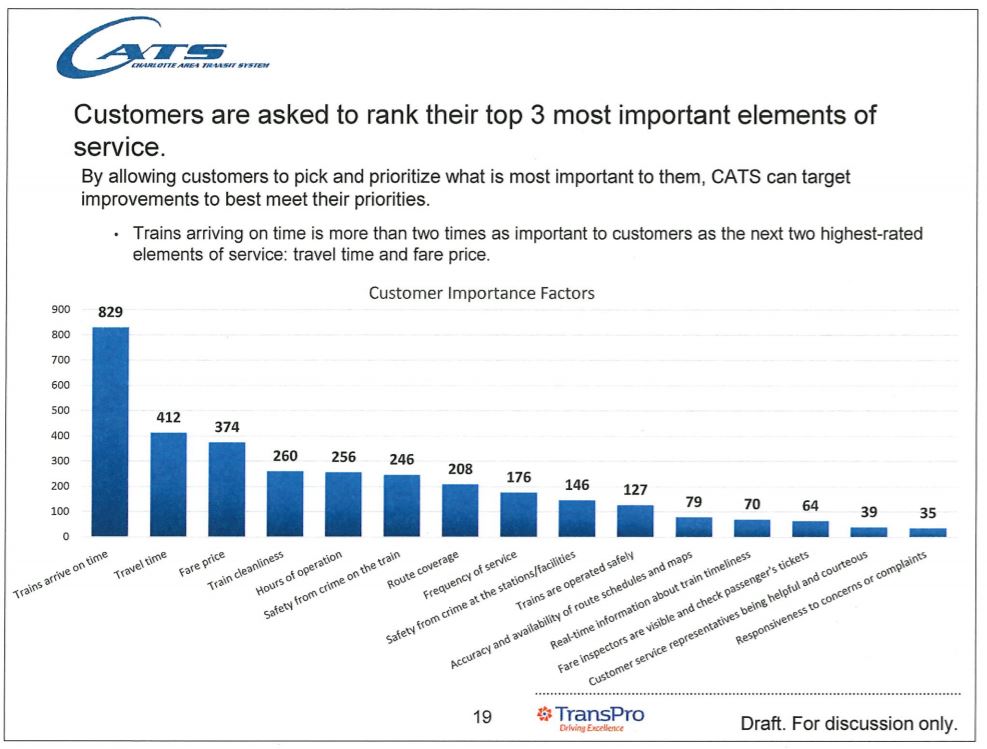 We congratulate CATS on these results! They tell us that most people who are riding the bus are having a good experience.

But it's important to consider the scope of the survey. It was designed to capture the perception of existing riders.

If someone isn't riding the bus, their inability to ride may very well be because the bus doesn’t run frequently enough, or doesn't run during the hours they need to commute to and from work, or stop close enough for them to walk to it.

Waiting time between Lynx Blue Line trains will increase by 90 seconds. What does that mean for riders?

Light rail service schedules will change in April as the frequency of trains decreases from the current 7.5 minutes to 9 minutes. The change is necessary to allow the 15-year-old light rail cars to be dismantled and sent away (several at a time) for their midlife heavy maintenance. 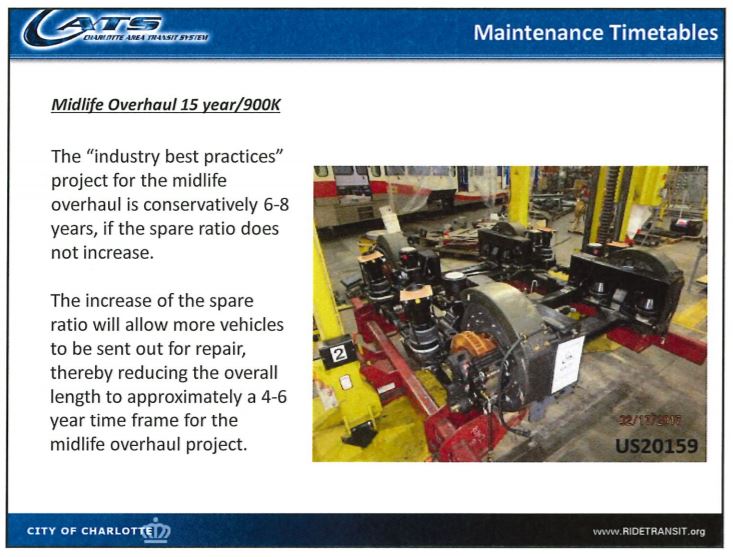 While a 90-second increase may not sound like a long period of time, we share Transit Service Advisory Committee Chair Krissy Oechslin’s concern, as she commented in the MTC meeting, that demand for light rail service continues to remain steady. As a result, sometimes the trains are too crowded during rush hour for passengers to get on. Hopefully, CATS will keep in mind the ridership demand and find a solution to this problem during the estimated 5 years needed to complete the maintenance process.

MTC delegates from Mecklenburg County’s towns spoke up about their need for the MTC to step up improvements to bus stops outside of Charlotte city limits. While the CEO of CATS, John Lewis, spoke on the need to standardize bus shelter design to keep costs down, the mayors from surrounding towns highlighted the rapid pace of economic development in their towns.

The surrounding towns want to meet the needs of current riders and want to attract new riders by improving bus stop amenities. With only $1.5 Million in the budget for the next 5 years, it's becoming pretty clear that $300,000 per year won't be nearly enough to build the better bus stops that riders in Charlotte and the towns of Mecklenburg County desperately need.

CATS staff will bring a proposed solution to the MTC in March, which we hope will equitably address transportation needs both in Charlotte and in the towns.

Frustrated with the traffic congestion on I-77 between Uptown and North Mecklenburg? Good news!  Ridership on the improved MetroRAPID Express routes is up 3% within just the first month! These routes are attracting new riders who are ditching their car commutes in favor of the speedy travel times on the buses using the express lanes. Check it out for yourself!

We hope this transit update was helpful. Want to join us at an upcoming MTC meeting? They’re usually held at 5:30 pm on the 4th Wednesday of the month in room 267 of the Charlotte Mecklenburg Government Center. Details here.