Thanks to the support of our members, we held a sustainability visioning workshop in West Charlotte last Friday. We had the pleasure of working with 18 youth at the Arbor Glen Outreach Center on issues of sustainability. After discussing the challenges that face their community, they created designs for traffic calming signs for their neighborhood. 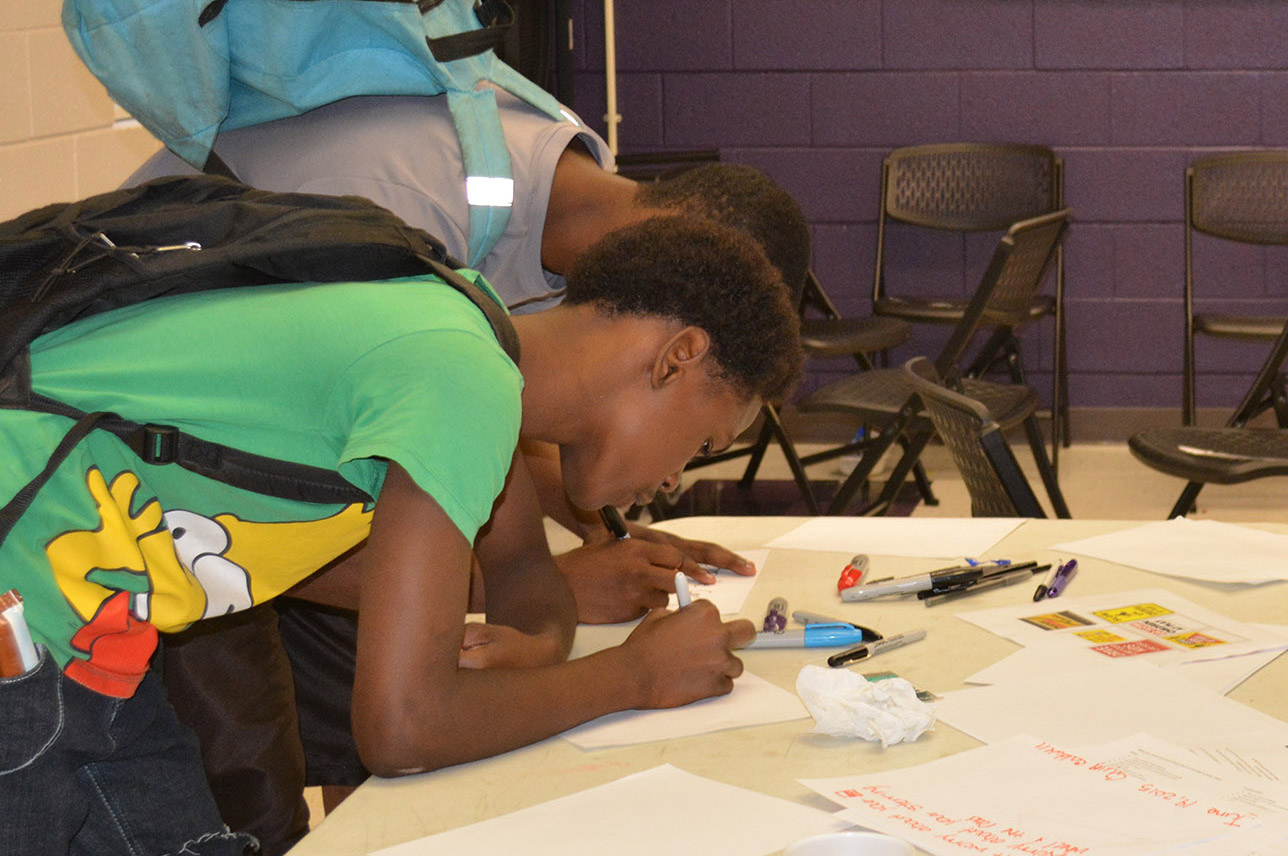 Local residents like you play a critical role in ensuring we have the resources to carry out our work in the community to inspire choices that lead to a to a healthier and more vibrant community for generations to come! Help us do more by becoming a Sustain Charlotte member today for as little as $3/month -- that's one cup of coffee! Click to learn how easily you can support our mission and your community via membership:

According to The Charlotte Observer, "the Charlotte City Council approved $7.7 million for further design work on the second phase of the streetcar line in a 7-4 vote Monday evening. The first segment of the streetcar, or CityLynx Gold Line, is scheduled to open July 14. That 1.5-mile segment will run from Time Warner Cable Arena to Novant Health Presbyterian Medical Center. Charlotte has already spent $6.7 million on design work for the second phase of the line, which would reach Johnson C. Smith University in one direction and Sunnyside Avenue in Elizabeth in the other direction. It would open in 2019. The city is expected to pay $75 million of the $150 million cost of the second phase of the project. The other half could be paid with a grant in President Barack Obama’s proposed budget for the upcoming fiscal year." This is great news! We are glad to hear that the City of Charlotte has remained committed to their investment in the streetcar. Visit our blog to read our list of some of the expected social, environmental, and economic benefits or download our 2013 streetcar report here: Go for the Gold: Why Streetcars Are a Win for Charlotte.

I-77 Toll Debate Is Missing the Most Important Question

In his commentary on the toll lane debate, Craig Lewis writes, "when asked whether I support the toll lane, my response is yes, but it won’t make a difference. We simply need more choices, and choices not predicated on accommodating single-occupancy vehicles on single-purpose freeways. Until the Charlotte region and our partners in Raleigh and Washington get serious about funding transit, we are going to remain a community with few choices." Lewis points to transit for the solution to our traffic problem. He states, "I hate to break it to you, but there is no highway wide enough to accommodate growth’s demands. Transportation researchers have already proven that the inconvenient truth of “induced demand” will sap any capacity in any additional lanes within a generation. Induced demand is a well-proven, if counterintuitive, result. Highway widening will increase demand (congestion) for the capacity rather than relieve it." We agree with Craig Lewis, and urge our leaders to continue to invest in transit projects as well as projects to enhance biking and walking that provide Charlotteans with more transportation choices! To read more, visit PlanCharlotte.

Why Cycletrack Networks Should Be the Next Great American Transit Project

According to The Washington Post, "experts say that for cycling to truly blossom in the United States will require networks of cycletracks -- bike lanes separated from vehicular traffic by vertical barriers -- so that bikers of all ages can ride without fear of serious harm...Plopping a “cyclists may use full lane” sign on a street with a 40 mph speed limit is like inviting someone to swim with sharks. Creating bike lanes, denoted with paint, is better, but still isn’t always appealing to someone who cherishes a peaceful commute. To become a truly bike-friendly country means building robust networks of cycletracks throughout U.S. cities." We couldn't agree more! To read the full article, visit The Washington Post.

In a recent article, Grist reports that "under [Seattle Transportation Director] Kubly, the Seattle Department of Transportation (SDOT) has laid out an ambitious plan to overhaul the city’s streets. The plan, called Move Seattle, is remarkable in many ways, but none more than this: While it includes maintenance and repair of existing roads, and upgrading bridges to make them earthquake-safe, there are virtually no new accommodations for cars. Instead, it is a plan to more efficiently move people around the city by bus, transit, bike, and on foot...This may sound basic, but the suggestion that cars are not the first and best use for every street, while other uses are to be shoehorned in where it’s convenient, is something of a revelation here, as it would be in many American cities." Wouldn't you love to see transportation plans of our region truly accommodate the needs of all users? Read more about the initiatives that are part of Move Seattle at Grist.

Is the U.S. Starting to Turn the Corner on Urban Sprawl?

A new study highlighted in The New York Times finds that "once the signature of an era of pell-mell development, American sprawl has slowed to a crawl in recent years, a new study finds. New streets in metro areas are being built more densely packed and less spread out, according to a study in the journal Proceedings of the National Academy of Sciences that looked at a nearly century of sprawl in U.S. street construction. Researchers from Canada and California found sprawl steadily increased in new street construction from 1920 until it peaked in 1994 and has dropped 9 percent since...The five counties that Barrington-Leigh found to be controlling sprawl the most since the mid-1990s are Travis County, Texas; Mecklenburg County, North Carolina; Alachua County, Florida; Iredell County, North Carolina; and Franklin County, Ohio." Given that in 2014 the Charlotte Metro was ranked 5th most sprawling large metro in the nation, we are glad to see that Mecklenburg County has been recognized for efforts to control sprawl, but we still have a long way to go! To read the full article, visit The New York Times.

Share your transit story to be part of our new project!
Our summer intern, Miriam Mohammed, needs to interview local transit riders for her research and outreach project. If you ride the bus and/or light rail as daily transportation, she’d like to talk to you about how it impacts your financial situation and quality of life. To become part of this important project that will inform our community about the benefits (and current limitations) of transit, contact [email protected] by next Thursday, July 2nd.

Tell your legislators to say 'no' to harmful bike laws in North Carolina!
Section 7 of NC House Bill 44 would place unnecessary restrictions on the addition of bike lanes to our communities, and would limit the ability of local communities to design transportation systems that fit their needs. Click here to enter your address and see who represents you in the North Carolina House of Representatives and Senate, then email them and ask them to share your concerns with members of the conference committee for this bill. A personalized e-mail is far more impactful than a form letter! Tell them about how bike lanes have made (or could make) bicycling safer and more convenient for you and the people you know.

Attend the Cross Charlotte Trail Public Meeting! City and County staff are hosting this community workshop to provide information about the Cross Charlotte Trail (XCLT) and hear from you about trail design, amenities and possible alignments. Share how you will use the trail! Come by the 2nd floor of Charlotte Mecklenburg Government Center (600 E Fourth St Charlotte, NC 28202) any time on June 30, 2015 from 4:30pm - 7:30pm. For more information, click here.

Are you interested in giving a presentation at the 2015 NC Bike Summit in Charlotte this October? The call for papers is open now through July 17! Click here for instructions and to learn more. Sustain Charlotte is the local host for this 4th annual North Carolina Bicycle Summit, which will be hosted in Charlotte October 15-17, 2015!

Green Drinks Charlotte + Sustain Charlotte Monthly Mixer
6:00pm - 7:30pm @ The Liberty, 1812 South Blvd, Charlotte. Join us for an informal and fun evening of conversation and networking. Our Monthly Mixers provide an opportunity where you can learn more about us, our partners, and meet others interested in local sustainability! You'll hear from our Silver Partner, Greffen Systems, and also have a chance to register for our 2015 Race to the Beach commute challenge! Click here to read more and to RSVP.

Online Registration opens for Race to the Beach
Sustain Charlotte is a sponsor of this year's Race to the Beach, July 13 - August 23. Finish the race for your chance to win a weekend beach getaway! More information coming soon!